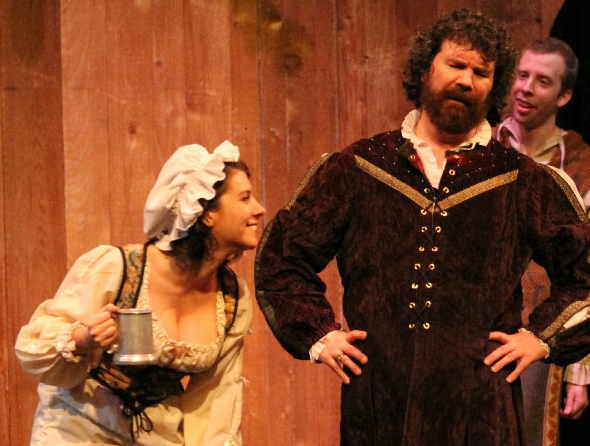 Sometimes people say, “If you can do Shakespeare- you can do anything!”

You know- I think there’s something to that. And it’s not because studying and performing Shakespeare or other Classical playwrights that makes you some intelligent, artsy fartsy person with a deeper sense of the world and mastery of the human language – in my opinion, it’s more visceral and simple than that.

Honestly- I’ve found myself growing a lot as an actor more through working on classical pieces than I did going through a Meisner class. That’s not to say that Meisner wasn’t extremely helpful- but perhaps the fusion of the Meisner and Classical training together is what really helped me break some emotional/mental barriers I had when it came to my acting.

When you have a week and a half to rehearse a play before it goes up- you learn to get your act together- quick! You become a faster learner and you don’t have time to luxuriate in things, it’s all about just getting the show together and in front of a crowd. I find in these processes I end up discovering most of the new, fun things about my character and the role *during* the performances itself rather than just in the rehearsal room. When you only do a full run about once or twice before getting in front of the audience- you have no other choice, really.

While it can be slightly scary to think that your character nuances haven’t necessarily been 100% fleshed out in rehearsal before people are watching- in a way it’s pretty freeing and exhilarating and just a lot of fun.

For someone who LOVES to be over-rehearsed and super secure and comfortable in every tiny aspect, this has been extremely helpful for me to get out of my head and just TRUST that things will come together in the correct way.

A lot acting is built on trust and this is definitely a huge exercise in that.

Getting Out of Your Own Way

It’s really easy to over-analyze lines and try so hard to give the best performance that you brush over the actual lines themselves. With performing classical text- I find I don’t have that option.

I find that so beautiful and when you’re working with talented early Renaissance playwrights who really knew their way around the written word- it’s a special treat.

There’s always something to discover, if you get out of your own way, that is. It’s often during rehearsals or while just studying that I’ll re-read a line of text and just have that “lightbulb” moment where it’s like, “Ok- NOW I get it!”

Putting up a difficult show with limited rehearsal time just means that you’ve gotta be OK with imperfection, with things going wrong, and just always being prepared to roll with the punches.

As I mentioned, I love to be over-rehearsed. But just because that’s comfortable for me doesn’t necessarily mean that is what is going to make me better. So I’m grateful for all those little things that “go wrong” that remind me that yes- this is just a “play,” it’s not a “work.” It’s ok to not be perfect sometimes. The show will go on regardless. Even if you find yourself on opening night, thinking, “HOW ON EARTH is this show going to happen?!” It WILL happen. And it will be great. And you’ll finish the show and think, “Wow. That happened. And it was good.” Sure, things may have went awry, but the show will happen no matter what.

You know- I think that’s a great metaphor for life in general.