I often find my weight-lifting journey to be a series of ups and downs, (not anything unlike life itself.) You have those days where you walk out of the gym on top of the world because you just killed a workout- aaaaand then you have days like I had last night. Let me explain.

A couple weeks ago, I was doing heavy deadlifts which I generally LOVE because hey- they’re my best lift and it’s when I generally feel the fiercest in the gym! There’s just nothing like buckling that weight belt on, getting a hard-hitting jam going, and lifting close to 200 lbs. off the ground, especially being a petite woman at 5’2.”

My highest weight I’ve ever pulled was about a week and a half ago. 190 lbs- which is a PR. (Yay!) After that workout I thought- “You know what- maybe I’m stronger than I think! I wonder what it would take for me to enter into a powerlifting competition someday!”

Up until then, I honestly never gave it much thought because I just assumed I was FAR weaker than anyone that ever stepped foot into a meet and that I just wouldn’t be good enough to even think about it. But later that night I did some internet researching- and lo and behold! The girls in my weight class were only lifting 30-50 lbs. heavier than me across the board for all the lifts, which really isn’t THAT much more than what I’m doing now considering I only train for 5 reps at a time, and not 1. (Generally, if you can do 5 reps of X weight, you can actually do more than X weight when being tested for just 1 rep.)

It was at that moment a floodgate of opportunity presented itself. “Wow, this is…actually possible. This isn’t really that crazy of a thought!” I was just so mind boggled at the fact that it was in the realm of possibility and I started having discussions with my husband and father-in-law (Who is also a heavy lifter!) about it and we discussed powerlifting techniques, nutrition, etc.

Of course, I’d have a LOT of work to get to that point where I could compete, especially in my upper body lifts which tend to lag. But I definitely started planting the seeds in my mind about potentially competing someday soon. It felt cool to think about working towards a tangible goal instead of just systematically doing my lifts day in, day out, with no rhyme or reason.

Then… of course, somehow I ended up pulling my back. Not majorly- (No need to worry, mom!) but enough to cause me pain when I bend down…and enough to know I’m definitely going to have to put deadlifts on the backburner for awhile until it heals up.

I really don’t even know how that happened.  I probably had one second of bad technique or something. But anyway- I’m just dealing with it and it’ll be fine. I’m wise enough to know that anytime I tweak anything small I need to lay off and I do NOT try to overwork anything so I know it’ll be ok- but you know, it’s just really frustrating, especially with my new thoughts of competing!

Of course, this is the about the time when the negative thought circus comes to play; “Who are you kidding?! You’ll never be able to compete!”

I know that’s pretty overdramatic- but right at this point I’m feeling pretty discouraged about the idea. The whole experience also just made pretty introspective and think about my role in the fitness world.

I tend to have a hard time defining myself in the fitness world because for one, I know that I have no intention of ever doing physique/bikini competitions, generally based on my more relaxed attitude towards diet and the absolute hatred of counting macros/cals and massive love for Mexican food and ice cream. And that’s okay.

So then I think-“ I should do powerlifting competitions! It’s so much more empowering!” But then I just find it so hard to see myself in the Powerlifting world because, well,  it’s just so hard. I want so badly to be a part of that world, but situations like the one I’m currently in get me so discouraged. I’m sure that once I get over my minor back pull I will be deadlifting and getting in there again but for now I’m just a little disheartened by it all.

It’s just that all the time I see so many other amazing women just #BEASTMODE-ing it out all the time on social media. Lifting crazy amounts of weight like it’s nothing. And I compare myself to them and think, “Wow. I’m terrible compared to her!” And I know that’s a TERRIBLEEE way to think! I preach so much about not comparing yourself to other women’s bodies- and here I am doing the same gosh darn thing. Just more performance based. Which- honestly, is just as bad.

You know in my “Steps to a Healthier Body Image” post where I said one of the most important things you can do is to STOP following tons of fitness models on social media because it can cause you to endlessly compare yourself to them? I did that. But then I ended up replacing the fitness models with women who are elite lifters and busting out 300+ lbs. deadlifts and who can eat 10 doughnuts a day and still look phenomenal, and I realize-  I’ve just replaced a group of women to compare myself to. No Bueno.

For most people, seeing those sort of things can be incredibly motivating, and if that’s you- then GREAT! Keep following those people! But for many like me, it can turn into a vicious comparison cycle. You have to understand that your progress is YOUR progress. And it means something.  No matter whether you just started squatting the bar at 45 lbs., or stepped into your first fitness class, or you’re squatting 300 lbs and winning competitions- it’s a huge accomplishment, and you have to understand that everyone’s journey is different.  It’s terribly damaging to compare yourself to the .001% of women that are doing superhero-worthy things in the fitness world- thinking that you’ll never be good enough because you know what? YOU. ARE. GOOD. ENOUGH!

Lately I’ve also been discouraged just in my work life and feeling like I want to accomplish more with my blog/LIFTmeupFitness but then I see other people just commanding the scene and it gets me down a little bit. But why should other people’s successes bring ME down? Geez- that’s not a healthy way to think, now is it? So I’m stopping that now.  Enough with the icky feelings of feeling inadequate all the time because I’m not at the level I want to be yet.

Anything worth doing in this world is going to take lots of work and grind and passion and failed PRs and tear-filled discussions, and scary business meetings, and sacrifice, and a whole lot of GOD KNOWS what else. So get out there, get it done, and realize you are your own worst enemy and nothing is going to happen unless you MAKE it happen!

It’s also so important to realize that you don’t have to be “The Best” at something to be able to make a difference in your field.  Just be GENUINE. Be honest. Be real. Be kind. Be unique. Think for yourself.

Not a trophy. Not a title. Not a brand-deal. Not paid sponsorships. Not Instagram followers.

Be genuinely, unashamedly, unapologetically YOU.

Why I Stay Fit 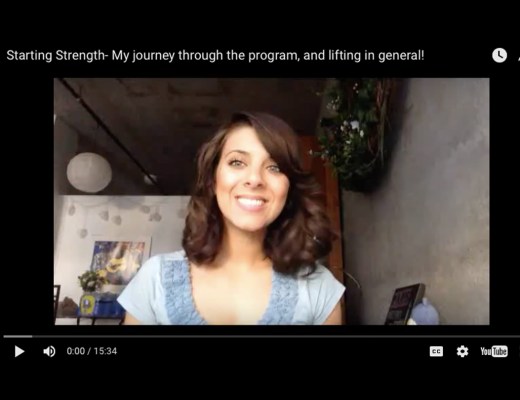